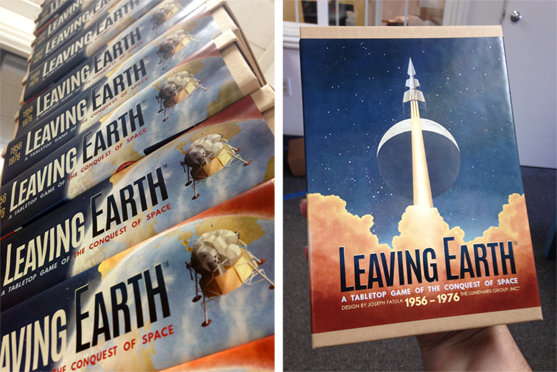 I'm the creator of Leaving Earth, a tabletop game about the space race of the 1950s to 1970s. It's currently rated in the top 0.5% of board games of all time on Board​Game​Geek.com. Leaving Earth and its expansions have sold over 10,000 copies worldwide, at board game stores, conventions, and even at NASA Ames Research Center.

Leaving Earth led me to take on many roles: researching the history and physics of spaceflight, designing and testing the rules, creating all the artwork, and leading the team that manufactured it. 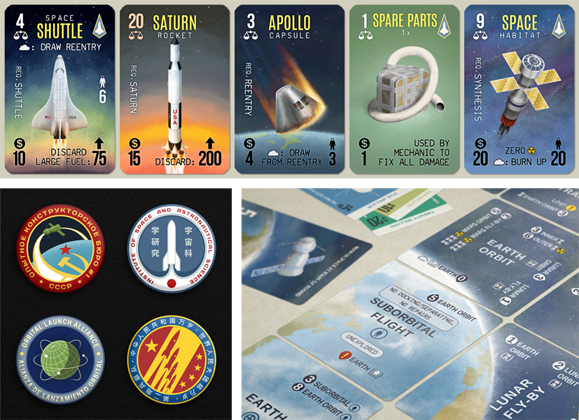 Leaving Earth is a complex game full of math and science. The design of the cards needs to convey a large amount of information in a small space, while still evoking the speculative space art of the 1950s.

The small cards shown here (top) represent spacecraft components. Each one has a variety of numbers associated with it, from its mass to the number of seats it provides for astronauts. The printed cards are only about 15⁄8″ × 21⁄2″ (41 × 63 mm) in size, so the data on each card must be both compact and easily readable.

The circular badges (lower left) represent historical space agencies and fictional joint ventures that can be formed during the game. The square cards (lower right) are locations, representing planets and trajectories where spacecraft can travel.

The numbers on these cards were chosen with a few goals in mind: keeping the math easy, representing actual science, and leading players into historical strategies. After researching the real-world ratios involved, I set the masses and thrusts of spacecraft components with the help of a program I wrote (in C#) to analyze different configurations of rockets and capsules to find one that met the design goals.

Here you can see a spread from the instructions for Leaving Earth, designed to be reminiscent of a science textbook from the 1950s. Creating this rulebook required writing and editing the rules, selecting fonts to be readable and thematically appropriate, making illustrations, and designing the page layout. To keep the cost of producing the game within budget, the rulebook interior had to be in black and white, so many of the illustrations use simplified versions of the components, showing only the most important features.

The rulebook went through several iterations of revision and testing to determine how well it could teach the game. For each test, I sat down with a person who didn't know how to play the game, then handed them this rulebook along with the game components. After they read it, I listened silently as they explained how to play the game, taking notes on what they understood correctly and what the rulebook had failed to convey. With those notes, I made changes to the rulebook and the cycle continued. 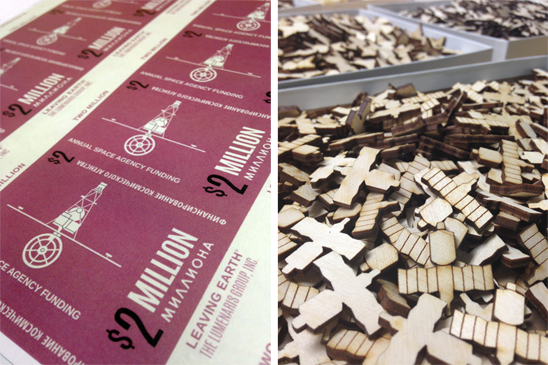 In the development of Leaving Earth and several prior products, I learned how to perform each of these tasks, operating equipment and writing instructions for operators to make each particular product. At Lumenaris, I managed the manufacturing team for eight years, directing production, maintaining equipment, running quality control, and coordinating with management to order supplies and produce as needed for sales. 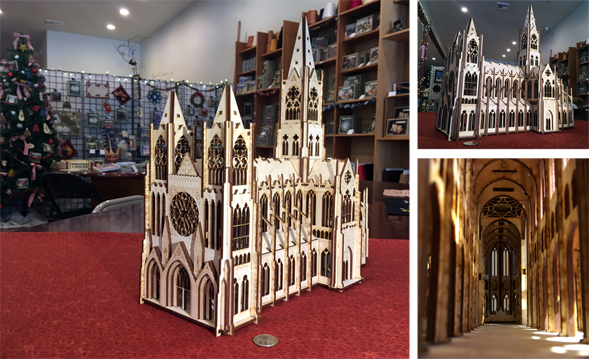 This is a model of a cathedral that I designed, laser-cut from birch plywood. It stands almost 15″ (37 cm) tall and contains 133 pieces. Putting it together takes about half an hour.

This cathedral follows the Gothic architectural style that flourished throughout Europe from the 12th through 16th centuries. It combines several variations on the Gothic style. A central spire as wide as the crossing below is typically English. Continental Gothic cathedrals usually have a thinner spire, allowing the rooves of the four arms of the cruciform cathedral to meet on a diagonal. A rounded east end is common in French cathedrals, unlike the squared-off end more common in England. 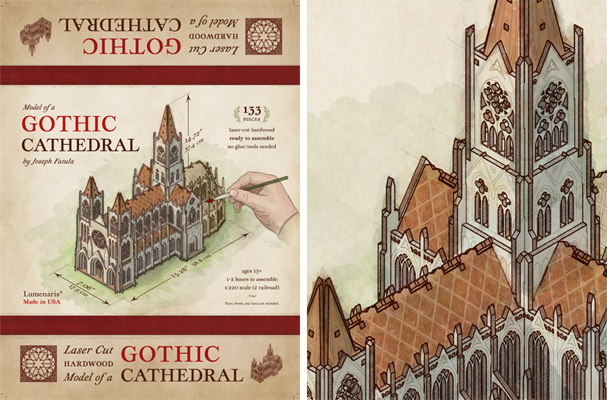 The illustration on the box label is an isometric view of the cathedral created in Photoshop from two-dimensional pieces, then painted over digitally for a watercolor type of look.

The west front of this cathedral (left end of the building) is based largely on the cathedrals of Reims and Laon in northern France. Some of the engravings are based on statuary from the cathedrals of Cologne and Salisbury.

I made an instruction manual full of technical illustrations to show how all the parts go together. When testing the effectiveness of the manual, I asked two volunteers to try assembling the cathedral. One of the volunteers did so using only the text of the manual, while the other used only the illustrations, in consideration of different learning styles. They were both successful, and their feedback was invaluable in further revisions.

The illustrations were all created in Photoshop, while the instructional text was added in Indesign.

To compare climates, I examined temperature and precipitation for the hottest and coldest months of the year, as this data is readily available for most cities around the world. The comparison metric I'm using also considers the ratio of summer precipitation to winter, which helps distinguish seasonal monsoon rainfall from consistent year-round rainfall. 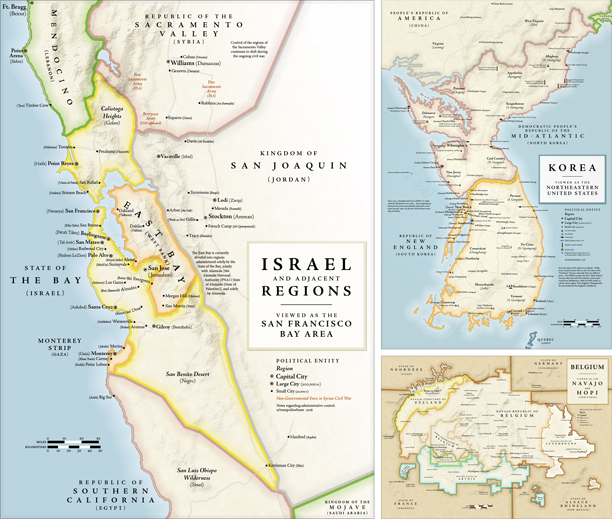 Each map in this series takes two widely-separated places (such as Israel and the San Francisco Bay Area) and overlays them at the same scale, using the political borders of one and the physical features of the other, as a way of giving a more familiar context to a less familiar place.

The Israel / Bay Area map (left) began from a simple observation: that Israel and the Bay Area are roughly the same size and shape. Driving from Tel Aviv to Jerusalem is like driving from San Mateo to San Jose. Amman (the capital of neighboring Jordan) is as far away as Stockton. It's not a perfect comparison — Israel is thinner at Ashdod / Santa Cruz, and there's obviously no bay dividing Israel in two — but it's close enough to help imagine one place if you're familiar with the other.

The other two maps here follow the same pattern. The Korean conflict is laid over the Northeastern US (upper right) as Wilmington, Delaware (Pyongyang) faces off against New York City (Seoul) across a demilitarized zone running from Edison to Scranton. Belgium turns out to be about the same size and shape as the Navajo/Hopi territories of the Four Corners area. 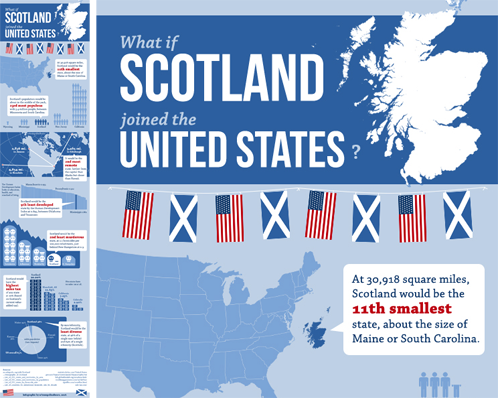 With all the talk of Scottish independence over the last few years, I thought it might be good to get a bit more familiar with Scotland, on terms that are easy to understand. This infographic imagines what Scotland might look like as a US state, comparing it to other states in terms like economic size, population demographics, and taxation. While no one is seriously considering Scotland joining the US, this type of comparison could help people in both countries understand the scale of the other.

Victory through Industry is a tabletop game about producing materiel for the war effort. Players build a large factory complex, turning things into other things. They start with raw materials, such as coal or cotton, and they end up (through many intermediate stages) producing finished products, such as tanks or battleships.

For the cover art (and for this advertising poster) I made use of two paintings commissioned by the British government during WWII. The lathe worker seen here is from Ruby Loftus Screwing a Breech Ring by Laura Knight. The background is from Production of Tanks by Terence Cuneo. 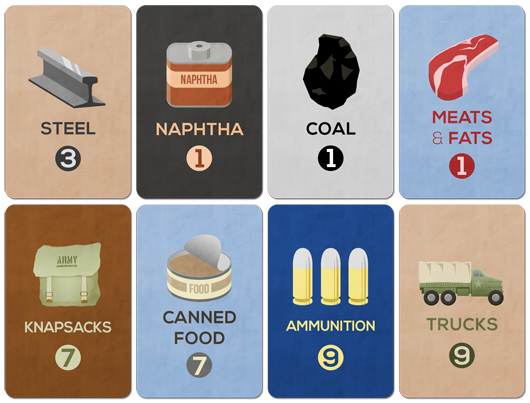 Unlike Leaving Earth, Victory through Industry is a visually simple game, where each card only needs to convey a small amount of information. I made up a set of easily-distinguished icons for each of the 42 different products and factory units, assigning them to color categories to help players keep track of the item's place in their factory layout. 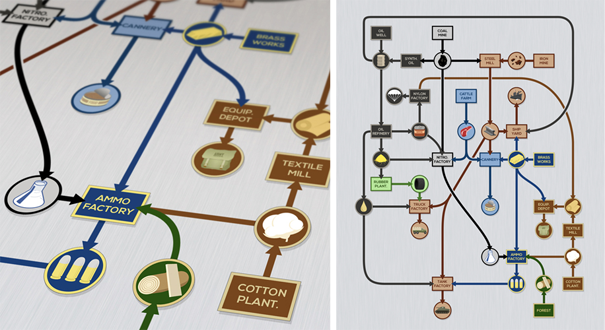 While the cards in this game are simple, the resulting flow of products is more complex. I created a flowchart as a visual aid to help players see all the ways a single product might interact with other parts of their factory complex.

After moving to a railroad town, Lumenaris was looking to rebrand from their staid corporate graphics to something with more fitting with the 1890s Old West architecture of their new surroundings.

Using a variety of 1890s business logos for inspiration, I designed a new logo (top) for large outdoor display. If you happen to visit Colfax, California, you can see this logo in progress, being painted 12 feet tall on Lumenaris' building. Their new business card (bottom left) uses a simpler banner logo in a similar style. 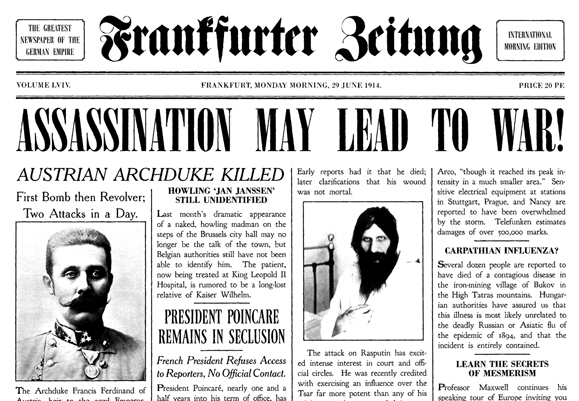 I created this newspaper mockup based on the style of various papers from the early 20th century. It was used for a roleplaying game about mysterious events in the days leading up to the Great War. The images are all from the era.

I produced the layout of the newspaper in Indesign, then applied some effects in Photoshop to give it a rougher printed appearance.